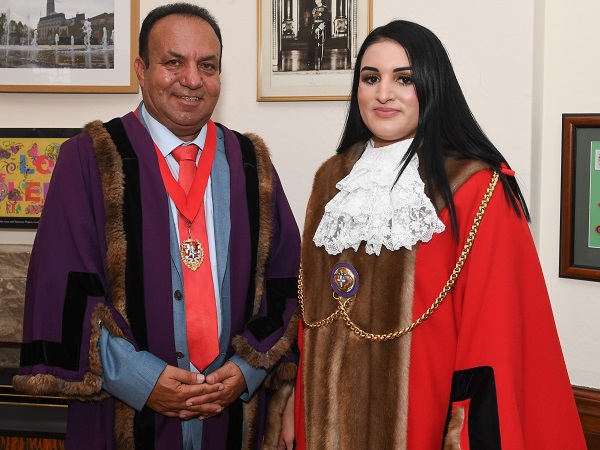 I was born in the L&D hospital and have lived in Luton my entire life; I am the youngest of six children.

I attended Maidenhall Infants and Junior School. Challney High School for Girls and completed my further education at Barnfield College.

I am currently employed in a fantastic firm called Bretherton Law who support and nurture my civic duties.

Growing up one of my greatest influences was my father, Dr Raja Saleem, who has been Deputy Mayor (x2) and Mayor of Luton (x2).

At the tender age of nine years of age, I accompanied him to various mayoral functions as his companion. This exposure highlighted my desire to help others in life and see what Luton meant to so many people.

I have been a member of the Labour Party since I turned 15 years old and have always been an active member, assisting in both local and general elections. I followed in my father’s footsteps in becoming a councillor and now Mayor of Luton, a position he held with great esteem.

I have been the Deputy Mayor of Luton previously in 2015 and I feel this was a great stepping stone prior in becoming the Mayor this year.

I believe I am one of the youngest Mayors of Luton and it is both an honour and privilege to represent my birth town, more so in the Queens Platinum Jubilee year.

I have been the Chair of the Labour group setting the agenda for meetings and ensuring the groups code is adhered too.

As a councillor I have served on various committees and outside bodies.

I enjoy meeting people from all backgrounds of life and socialising with them.

It gives me great satisfaction when helping people. Where needed I have gone above and beyond to do as much as I possibly can to assist and support others.

My name is Asif Masood and I have recently been elected as Deputy Mayor. Alongside this, I am the elected Councillor for Icknield Ward and have held the honour to serve my residents since 2019.

Since becoming elected Councillor, I have served on various Committees, such as Constitution, Planning & Development and Licensing. I am passionate about helping local residents and I am a strong advocate of improving Social Care for this town. The diversity of this town makes this a wonderful place to live and serve.